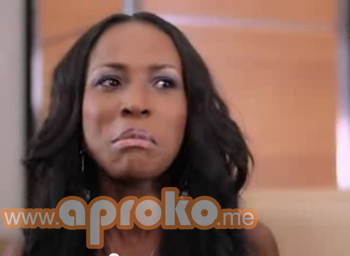 As a Social Media Marketer, I come across several clients who need to get Nigerian blogs, and news sites to review their products and services, which I never hesitate to direct them to either Nairaland or Bella Naija as the most effective websites for getting the highest click-through rates, and most honest comments.

Some clients prefer to get on gossip sites like Naij.com or Linda Ikeji Blog despite my reservations and reasons. Naij recently made themselves popular for using Russian hackers to redirect Etisalat subscribers to their homepage at some point, and Linda Ikeji is known amongst bloggers for her horde of hired hands, using multiple identities, and devices to post dozens of comments and spark irrelevant arguments, not forgetting her vicious fabrications euphemised as idle gossip.

A Port Harcourt based artiste, M-Kaze, recently consulted with Bar Baric Entertainment for promotional services, for which among several bloggers and micro-bloggers, his label chose Linda Ikeji. 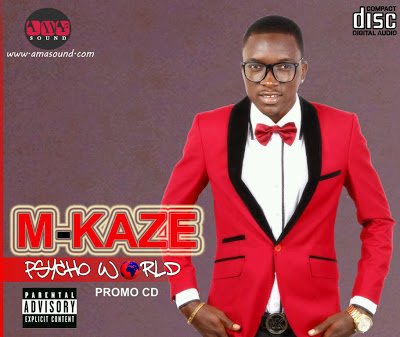 All the bloggers sent invoices and were pre-paid. By 9:41am on the next day, Tuesday, 18th June, 2013, Linda Ikeji was paid N50,000 (Fifty Thousand Naira) in line with her quotation, which indicated that the AD would be posted in 48 hours. 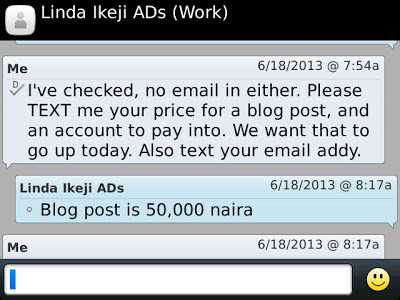 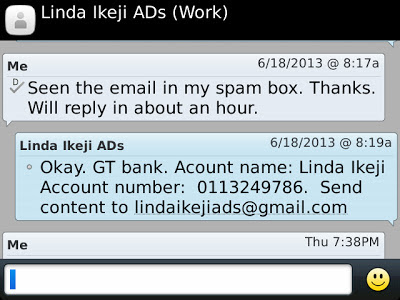 Aside from the fact that Linda Ikeji Blog could not accept a brief from which they were supposed to write their own unique story, but requested a full pre-written press release, things really started getting awry when by Thursday evening, the client called to complain that their AD had not been posted. 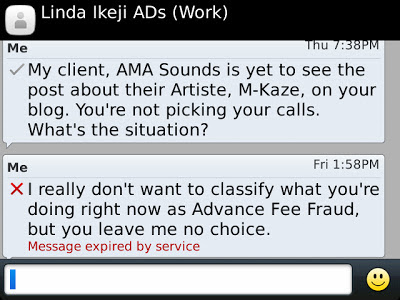 All avenues were employed in getting in touch with Linda Ikeji, and her staff, yet to no avail. Eventually, she was sighted on Twitter tweeting links from her blog, and a tweet was sent to her demanding the AD be set up immediately. Instantly, we received a call promising that the press release on M-Kaze would be posted "first thing tomorrow morning" (Friday). 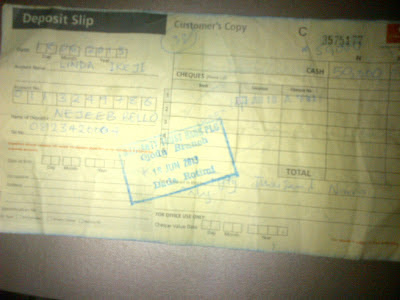 On Saturday, at noon, another call was placed to the Linda Ikeji team, after the advertorial had not showed up the entire morning. They claimed they were having difficulties posting the link to M-Kaze's video. Knowing quite well that the same link had been posted by more than 15 other blogs, yet eager to avoid debates which would further delay the promotion, the root URL to the video was provided within the hour. Still, same link was still being requested over, and over again, via various channels, till 5pm on Sunday. At that point, we had to specifically request that the AD was not posted on a Sunday, since Sundays had the least internet activity. They agreed, claiming we'd see our advert on Monday. 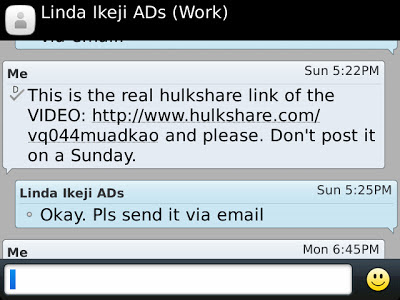 All this while, I was dealing with tens of calls of lamentations, and threats of contract termination from my clients, most of the calls I made to the Linda Ikeji contact number were either cut off, or unanswered. When eventually, I would contact them via text or Twitter with a strongly worded message, they'd give me a very brief call, claiming they've been driving, and making more promises for "first thing tomorrow morning" again. I began to visualize Linda Ikeji and her staff akin to Dangote truck drivers.

By Monday night, everyone had become fed up with the routine of the Linda Ikeji "first thing tomorrow" antic. The AMA Sound CEO who had never called me directly, did so at this time, requesting that the article be withdrawn and our payment be refunded. A text message was sent again to Linda Ikeji after which her which a call was put through to us for consolation, but after hearing that we were inconsolable, they agreed to make the refund, again, "first thing tomorrow morning". They even sent us a text message urging us to collect the money physically, like though we could just walk into our computer, unto Linda Ikeji's blogspot. 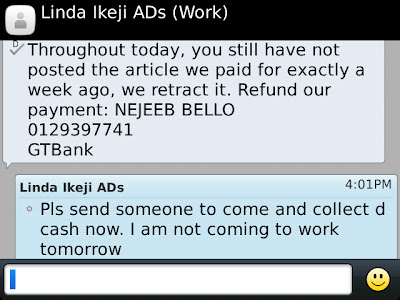 Even though there was no refund made to our account first thing in the morning of Tuesday 25th, 2013, as usual, the surprise however, was that no payment was made at all, even by 4pm. This time around, a call to Linda Ikeji was not taken lightly, as the receiver of the call made it clear she was not the person, Linda Ikeji, but the Business Manager of the blog, and that she had better things to do than repaying our money. Going ahead to use several expletives in referring to us.

Wednesday, still no refund, yet an additional feature now was a claim that our N50,000 had been refunded. 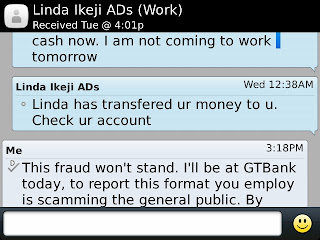 On Thursday, 27th June, I had made clear that this incidence of Advance Fee Fraud would be first reported to GTBank, then the EFCC, and finally, the Police. Several threats and insults were hurled from the Linda Ikeji camp. 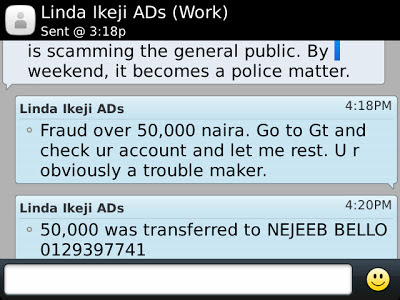 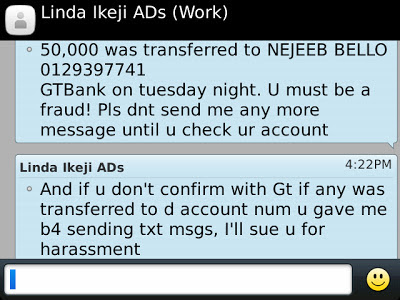 Linda Ikeji herself who had come in direct contact with the client, AMA Sound, and made a claim that no money was ever paid into her account regarding their promo. Instantly, she effected the transfer (5:04pm, Thursday, 27th June, 2013). 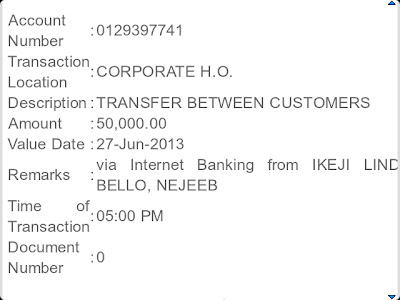 The primary purpose of publishing this incidence is primarily to make a call to all upcoming artistes and entrepreneurs who have fallen for this Linda Ikeji Promo Fraud to come forward. Obviously, threats have been made to them but with the necessary courage, they will be recompensed. Secondly, I want to make it absolutely clear to everyone who may be mutual acquaintances to myself and the culprit, that for making me lose such a valuable client, for which I'm suing herself, and her entire establishment for breach of contract, and seeking punitive damages against Linda Ikeji, and the Linda Ikeji Blog.